Forty years ago, Indian scientists started heading to Antarctica. Like other scientists from across the globe, their mission was to discover and learn something new about the planet. And while they’ve created a whole lot of knowledge over the years, this time, they’ve achieved something entirely new. For the very first time, Indian scientists have discovered a new plant species in Antarctica!

Antarctica is the driest, windiest and coldest continent on the planet.

The plant they’ve discovered is a type of moss that the scientists stumbled upon while wandering around near their research base, Bharati. Now, they’ve named the newly discovered plant specie, Bryum bharatiensis.

Unjumble this image to get better acquainted with the beautiful and resilient moss specie: Bryum bharatiensis.

That’s quite a beautiful plant, isn’t it? Well, here are some facts about its discovery for you to enjoy.

The scientists who discovered Bryum bharatiensis were polar biologists from the Central University of Punjab in India.

These scientists discovered Bryum bharatiensis way back in 2017 on their 36th mission to Antarctica. However, it was only this year that they could confirm that it is a new and previously undiscovered species. That is because they’ve spent the past five years making sure that the plant’s DNA is unique to anything else that’s come before it.

The plant is one among more than one hundred species of plants that have been found in Antarctica. It was named Bryum bharatiensis after the Hindu goddess of learning, Bharati.

Can you think of something else in Antarctica that was named after the goddess Bharati? Stick around until the end for the answer.

— Professor Felix Bast, the man who led the team to Antarctica

The big question, of course, is how does the plant survive in the coldest and driest place on Earth.

Yes, penguin poop is an essential part of the puzzle that explains the survival of Bryum bharatiensis.

Plants need nitrogen, along with potassium, phosphorus, sunlight and water, to survive. But, with only ice and rocks around, all that stuff is hard to find. Well, scientists found that the plant mainly grew in areas where one can find penguins. That’s because the plants survive on the poop of the penguins. Yup, poop is packed with moisture and the most essential element for survival, nitrogen.

Want to know more about what it takes for life to be created? Click on the image below to find out.

Bryum bharatiensis survives temperatures up to -76 degrees centigrade. It also thrives through six months of absolutely no sun and thick winter snow. Scientists aren’t sure about how it survives all that hardship, but they have a theory. They believe that the moss hibernates or dries up through the long winter months and then germinates again when the sun comes out. At that point, the plant also has the melting snow as a source of water.

So Cool but not cool enough

This plant can survive literally anything. It’s safe to say that it is not just adaptable but also pretty cool!

But, even though the discovery of the Bryum bharatiensis moss is exciting, it is evidence of the fact that Antarctica isn’t cool enough. In fact, the icy continent is going through something that is known as ‘greenification’.

“The finding that Antarctica was greenifying was disturbing, we don’t know what lies under the thick ice sheets. There could well be pathogenic microbes which could emerge when the ice melts due to global warming.”

Prof Raghavendra Prasad Tiwari, a leading biologist and the vice chancellor of the Central University of Punjab

Yup, you read that right. Deadly viruses and bacteria that are trapped in the snow could be freed with the melting snow and cause — we dare not say it — another pandemic.

The good news, of course, is that the world is finally starting to take note of climate change and cutting back on the activities that cause it.

Check out the article below to learn about how you can help keep all those viruses trapped in the snow for eternity.

.
What’s the coldest temperature that you’ve ever experienced?

Can you think of any reasons why Bryum bharatiensis survives Antarctica’s harsh winters?

Why are the biologists who discovered this wonderful plant known as polar biologists? 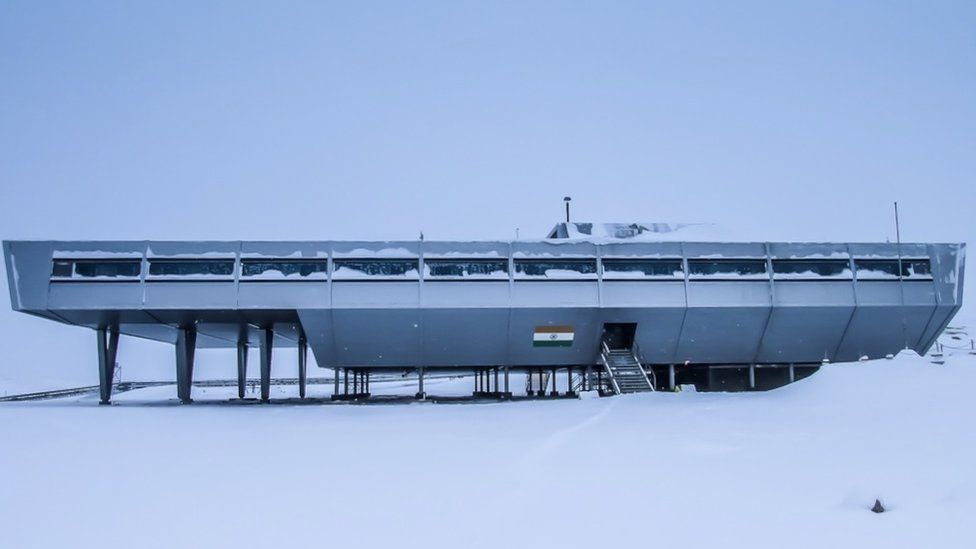 The Indian research base, Bharati.

With Excerpts From: BBC and The Indian Express.